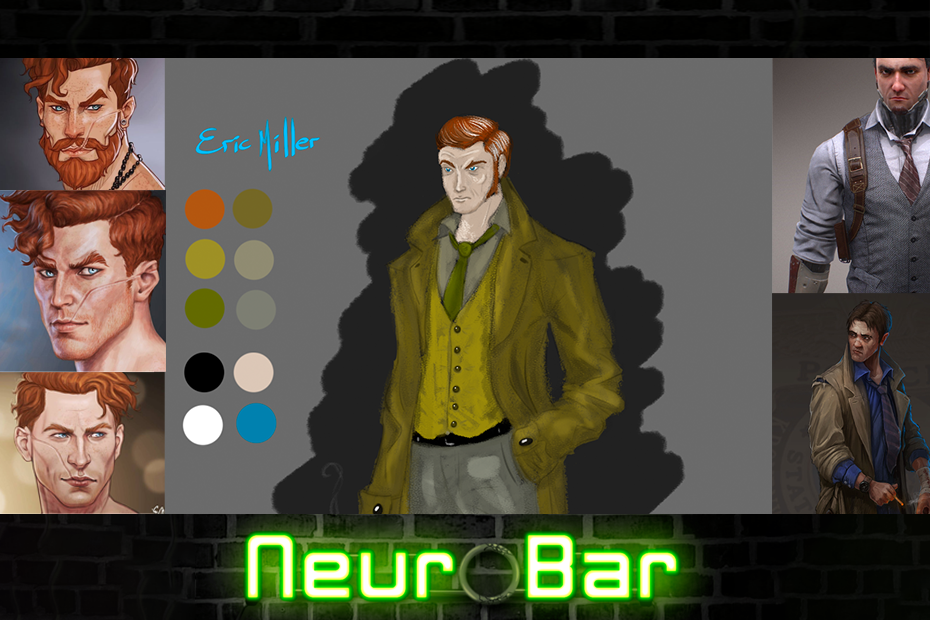 Not all my Character development entries will have this introduction; this time I do it because it is my first character file in the blog, and I think it is pertinent to dedicate some introductory words.

When I started this site, I wasn’t sure if I wanted to turn it into a “content encyclopedia” or not. After all, blogs tend to have very specific themes and rarely go off topic. That said, I recently realized that the theme of my blog is not just game design or creative advice, because this is not just a blog.

In addition, I recently started keeping a log of my podcast and the development of my indie game. It seemed relevant to do the same with the development of NeuroBar. Now that I have all the intellectual property records for the book, my mission is to finish it. And this blog is going to help me do it.

Who is Eric Miller?

Eric is one of the protagonists of NeuroBar, an anti-hero who follows the thread of the plot and helps us through it. Miller has already passed the age of 50 and, despite not having the best habits, he is a neat and elegant man.

In his youth, he began working as a private investigator alongside Elias Ricci, skilled in what Miller did not excel at: computers, desk work and general technological affinity. They were doing very well until the famous McEwan case, which led to the unbreakable enmity between Eric and Elias.

After being on the verge of losing his life on more than one occasion, Miller progressively changed his personality. When Ricci is finally cornered by Eric, he decides to intern himself in the Kraeplin Asylum as a last resort to protect himself. From then on, Miller began to work on his own.

I’m going to leave as many details of the character as possible, without revealing information that could be considered a Spoiler of the book.

Art used in the moodboard: